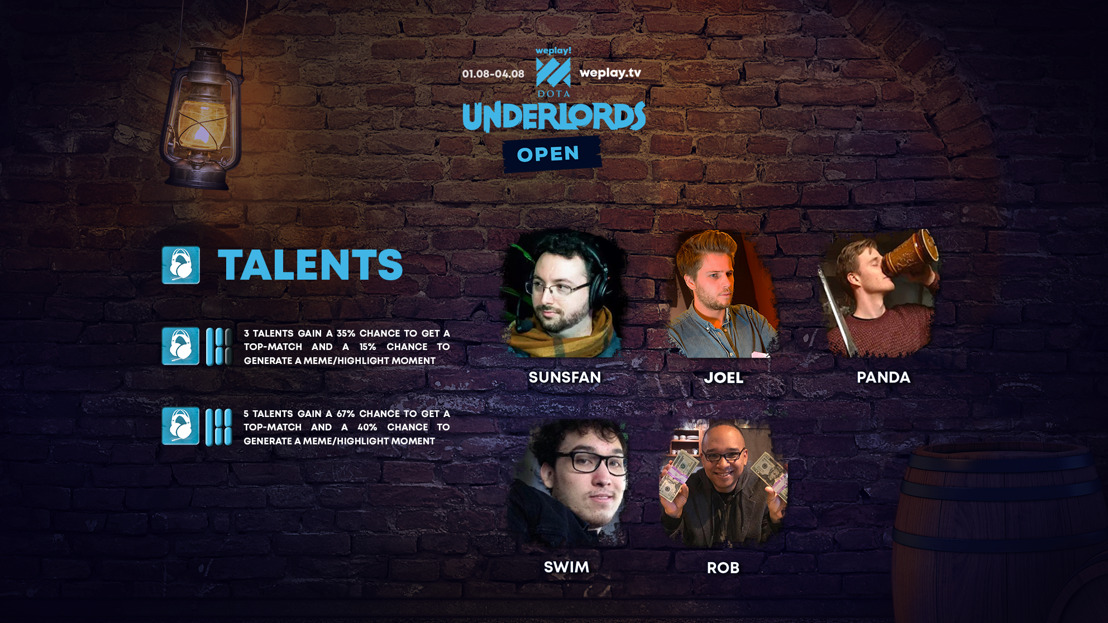 The broadcast lineup has been revealed for WePlay! Dota Underlords Open. The tournament organizer has brought together a wealth of talent with Robert "RobAJG" Gonzales holding down the studio as host, and four great casters — Shannon "SUNSfan" Scotten, Sean "swim" Huguenard, David "ImpetuousPanda" Nolskog, and Joel Larsson.

The Host. RobAJG is a real pro, he has commentated dozens of undercover fights, including Dota, Call of Duty, PUBG and other games. RobAJG does host huge events besides commentating. He's also a content producer for Team Liquid. Rob Gonzales knows how to keep the audience interested — and he's a fan of Dota Underlords. Rob's Twitter, Facebook and Twitch links.

Sean is the mastermind of his gang. He knows how to make cards win you games, as swim spent a hell lot of time in Artifact and Gwent. He participated in WePlay! Artifact: Agility tournament and the time has come for him to become a caster again in WePlay! Dota Underlords Open. Swim's Twitch, Youtube and Twitter links.

Joel's Magic: The Gathering past tells us of a tactical-mind, but he also is a great analyst. He recently started playing Dota Underlords and Teamfight Tactics, but we all know what's best of these two. Say "Hi" to Joel on Twitter.

Since 2012, the WePlay! Esports brand has been well-known for high quality organizing and broadcasting withs in the onlineesports tournaments and LAN finals. This includes tier 1, tier 2, and tier 3 professional teams from the in-house studio to their ownTwitch channel. In addition, to the creation and distribution of the esports content to their own media WePlay! Esports, the area of WePlay! Esports expertise lies in competitive gaming services, brands’ integration into esports, and media rights sales.

By harnessing what the public is most passionate about – esports and entertainment – the company embraces the opportunitiesand challenges in esports that empower businesses. They thereby evolve with this valuable global audience in our modern media environment.